music for 5 instruments and a gun 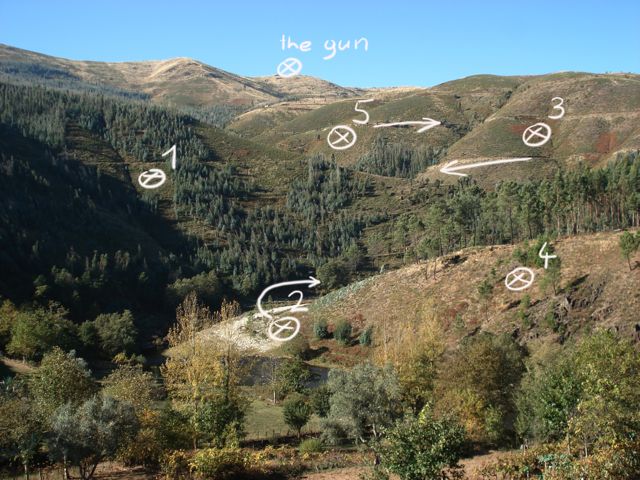 On my first visit to Nodar in 2007 we all went to a dance party in the neighbor village of Sequeiros with a local band playing traditional music. And there was one remarkable guy, squatting the stage once in a while, joining the band - every time with a different instrument.
Next morning, Rui Costa from Binaural/Nodar reported he had talked to this guy later asking him about his stage appearances and his answer was:

“every time I go to a dance party, I bring my 5 instruments and a gun”.

Fortunately the gun was not used that evening.
Anyway I realized immediately that I found my project for next years residency. Talking to Rui about my idea to compose a piece for 5 players distributed in the valley of Nodar being conducted by distant gunshots he spontaneously replied:

“the gun is not a problem”

So – here we go – in October 2008 the project was realized. Taking ideas from the dance party evening to the big stage of the Nodar valley: But the valley was not only the stage also the band. The natural soundscape was the music we were to join into.
The instruments we played would be heard from long distance, balancing with the sound of the wind, the river, the cars passing through the valley, or the planes passing above – whatever was there was the score and we had to fit in as guests for the short time of a performance.

music for 5 instruments and a gun @ nodar [excerpt]